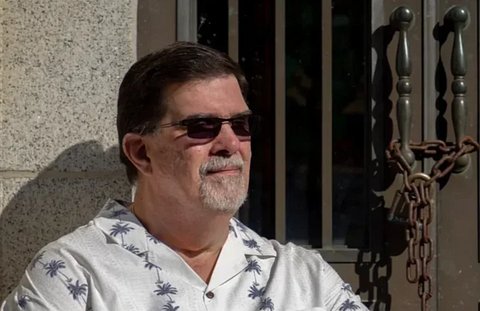 Yours truly in front of Brian Setzer's tour bus.
Pre-Order
Order from Amazon
Feel free to take a look around. Kick the tires. Look behind the curtains. Check for dust on the high shelves.

Check out the old house at the end of the dirt road.

But don't go at night.

And don't ask why the mausoleum door is chained.

You don't want to know.
GET STARTED

Some houses are only haunted...

This one is worse

Ben Chalmers is a successful novelist. His wife, Rachel, is a fledgling artist with a promising career, and their daughter Stacy is the joy of their life. His novels have made enough money for him to provide a dream home for his family.  But there is a force at work in their lives. A dark, chilling, ruthless force that has become part of the very fabric of their new home.

A malevolent entity becomes trapped in the wood and stone of the house and it will do whatever it takes, to find a way to complete its bloody transference to our world.

Forced to kill his parents at thirteen years old, tom keep them from becomming something inhuman, twenty-two years later, it's time for Jack Greene to finish what he started.

When a co-ed's mutilated body is found on a community college campus, the police are baffled. But Jack knows what killed the pretty college student; he's been hunting it for years. The hunt has been going on for too long, though, and Jack wants to end it. But he can't do it alone.

The local police aren't equipped to handle the monster in their midst, so Jack recruits Major Kelly Langston, and together they set out to rid the world of this murdering creature once and for all.

Hopefully before it kills again.

Could you cut off your arm to save your life?

This is the story of Sampson Parker’s strong faith and amazing will to survive against impossible odds.

With his hand and arm pulled deep into a mechanical corn picker, Sampson struggled against the machine for two hours, trying to free his arm. When his efforts to stop the chain drive which kept forcing his hand and arm deeper into the machine resulted in a fire, Sampson made the only choice available.

Exhausted and crying out to God for strength, he had to sever his arm with his pocket knife or burn to death.

Unthinkable Choice is the true story of one man’s faith in God, his family’s love, and his road to physical and spiritual wholeness.

"Thomas is one of those outstanding Southern writers – seemingly soft, languid, maybe even lazy, when actually what he is, is cotton wrapped about a razor. Half the time you don't even know he's gotten you until it's too late."

to my little corner of the Internet.

Yours truly in front of Brian Setzer's tour bus.

I'm always happy to hear from you

- Library -
These would look good on your bookshelf

Thomas is an award-winning writer, essayist, playwright, reporter, TV news producer, and a three-time American Christian Writers Association Writer of the Year. His work has appeared in numerous publications from Writer’s Digest and Exploring Alaska, to The Horror Zine and Cemetery Dance magazine.

He has written for many publishers including Baker Books, Grinning Skull Press, Zondervan, Barnes & Noble Books, Adams Media, Chronicle Books, Borderlands Press, Barbour Publishing, Pocket Books, and Cemetery Dance Publications. Two of his short stories (Mother and Child Reunion and The Heart is a Determined Hunter) have appeared on Tales to Terrify, and his short story, A Rustle of Owls' Wings, has been adapted for the stage.

Thomas has written jokes for Joan Rivers and his comedy material has been performed on The Tonight Show.

He is also, quite possibly, the only writer in captivity to have been included in collections with Stephen King, and the Rev. Rick Warren in the same week.

And other than author bios, he rarely refers to himself in the third person.